These asylum seekers included woman and children, and there are already reports coming out that some of those asylum seekers have suffered injuries and inhumane treatment since they were handed over to the Sri Lankan navy.

The asylum seekers were turned over to the Sri Lankan navy without any real assessment of their claims.
They did not have access to any legal representation, they were not given the opportunity to have their cases independently reviewed, and they were unable to appeal.
The government is currently holding other asylum seekers on the high seas, subject to a High Court injunction while their lawyers challenge whether the government has the legal power to hand over asylum seekers at sea.

In order to abide by the rule of law and comply with international law, the Australian Government must allow asylum seekers to put their claims to be assessed by an independent and impartial tribunal, with full access to legal representation and appropriate avenues of appeal.

The fact is that if these asylum seekers are genuine, then returning them to the exact country that they are risking life and limb to escape can only end badly.
Australia’s international reputation took a severe hammering during the Howard administration when the Tampo crisis hit international news.
This recent “approach” has attracted more justified and more severe international condemnation.

Former Australian Prime Minister, Malcolm Fraser once said:..”…if people are genuine refugees…there is no deterrant we can create which is going to be severe enough, cruel enough, nasty enough to stop them fleeing the terror from which they flee in their own lands.”

Apparently our current government disagrees, despite the overwhelming international condemnation of this inhumane approach to refugees. 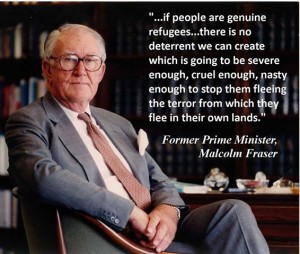