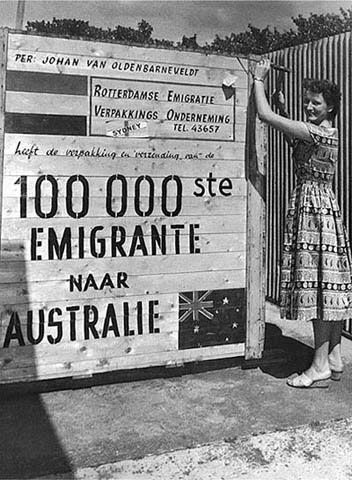 The 100 000th Dutch migrant, Mrs Adriana Zevenbergen arrived from Holland in November 1958, on the Johan van Olderbarneveldt. Here she unpacks all her worldly possessions from a suitably marked crate.

“Populate or perish” was the famous slogan used by post-World War II Labor Immigration Minister, Arthur Calwell, in his mission to overcome domestic resistance to immigration.

The long post-war boom in Australia was fuelled by the importation of labour and capital from overseas and was necessitated by the enormous labour gap left following the heavy losses sustained in the war.  In recent weeks, Bob Carr has taken a strong stance against an open-door policy, arguing that the country’s population is far greater than “what we need and what we can absorb, environmentally and economically.”  This perception of social and environmental insecurity is prompted by growing unemployment, particularly following the tail end of the mining boom.

However, independent research commissioned by the Migration Council of Australia warns against reducing net migration. Ostensibly, Australia needs to absorb at least 250 000 migrants a year to boost the economy by $1.6 trillion by 2050. The recent Intergenerational Report reveals that whilst net migration will remain stable, the Australian population is projected to double from 24 million today to 40 million in 2055.

Many immigration advocates point to Australia’s rapidly aging population, arguing that while Australia’s population growth has stagnated, a greater influx of migrants are needed within the workforce. By 2055, around 40 000 people will make it to their 100th birthday . However, by that stage almost one in five people aged 65 will still be in the workforce. Regardless, if labour productivity is not increased, Australia’s GDP could fall dramatically.

Immigration policy has been at the forefront of political debate in Australia throughout its entire history as a nation. Post-settlement, legislators had the contradictory task of fostering a national ideology based on racial exclusivity whilst remaining a civilised member of a diverse British Empire. Currently, politicians are attempting to balance the demand for foreign workers whilst propounding the importance of maintaining a tolerant and multicultural society. There is no denying that Australia’s open immigration policy has served to significantly boost our economy, whilst filling vital skilled labour shortages.

If you need assistance applying for your foreign worker’s visa, contact our migration experts on +61 7 3229 4025.