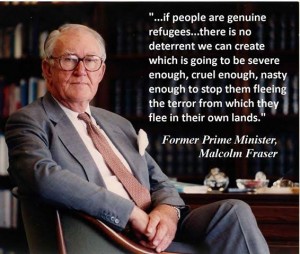 A leaked, confidential Department of Immigration document reveals that the government intends on implementing a more intense screening process for refugees. The report cites recent terror attacks such at the Martin Place siege, Parramatta police shooter Farhad Jabar and the Melbourne knife attack by Abdul Haider. All these antagonists were either refugees or dependents of recent migrants. This has not served to help the case of hardworking and highly skilled migrants seeking residence in Australia but it does beg the question – are we compromising our national security to do what we think is right?

These sort of vicious attacks on civilians undoubtedly pull at the heartstrings. This is especially poignant in light of rhetoric, such as that contained within the leaked report, which suggested that “it is expected some refugees from [the Syrian] conflict will bring issues, beliefs or associations that lead them to advocate or engage in politically motivated or communal violence.”  In reality, since September, the anticipated surge of hundreds of migrants from Syria has resulted in a small trickle of just over 20 people. This is a significant contrast to the additional 12, 000 bona fide refugees which the Australian government pledged to take in September last year.

The document also made reference to a number of changes which would limit the ease of migration including an ‘integration’ framework to assess the suitability of aspiring migrants for work within Australia, a new citizenship test and pledge and enhanced access to sensitive information to bolster intelligence from pre-visa to post-citizenship conferral.

Notably, there was a significant reference to Australia’s intake from the Lebanese conflict whereby the migrants were “largely from the poorer and uneducated Lebanese Muslim population”. This signals the unlikeliness that bona fide refugees who are fleeing civil turmoil will be successful in seeking asylum within Australia. The release of this classified document coincides with Immigration Minister, Peter Dutton’s announcement that injured Baby Asha will be returned to Nauru. It also demonstrates the type of ugly and endless permutations this policy area can inspire in our elected representatives. It might just be that we are so used to the unbelievable exchanges between our government and the Human Rights Commission that we can hardly help but consume our popcorn while we watch.